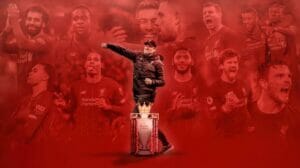 Liverpool were crowned champion as Chelsea defeated Manchester city 2:1 eliminating every chances of Man city challenging Liverpool for the crown.

Klopp’s men were somewhat heartbroken when rumors of annulling the season were flying around due to the outbreak of the deadly corona virus in April.

Before the global pandemic that halted every footballing activities, Liverpool were almost “invincible”.

” In that moment it was pure explosion…then pure…I cannot describe it, was really a nice moment” says Jürgen Klopp the Liverpool manager.

Former Liverpool greats and players have all been sending their congratulations, showering Klopp with encomiums for a job well done.